Posted at 13:20h in News by My Agency Savannah 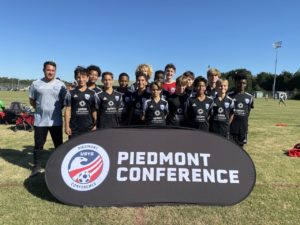 Congratulations to our 2008 Boys Premier team who finished the fall season undefeated in the Piedmont Conference of USYS National League! This team has earned a bid to play in National League P.R.O. for the fall and in the spring will play in high level tournaments. Here are some details of the season:

“National League is US Youth Soccer’s top level and the Piedmont Conference is made up of teams from Georgia, South Carolina and North Carolina,” Jeff Storey-Pitts, 2008 Boys Premier Coach, explained. “We are proud of how the boys worked hard for this individually and as a team. I am glad to see them achieve this goal together and showcase the stellar performance that Savannah United players are expected to demonstrate. The core of this group has come through our Academy system and have been with the club for years. It is great to see them push on and reach the highest levels.”

The 2008 Boys Premier played their best against tough, quality opponents; they are coached by Savannah United Director, Jeff Storey-Pitts. Best of luck, 08 Premier, we can’t wait to watch you compete at the next level!